On December 31, 2019, China reported its first case of a mysterious new kind of pneumonia: A SARS-like infection caused by an undiscovered new agent. Weeks later, the WHO warned about the rise of a new infectious disease, now known as COVID-19.

As weeks progressed, the virus quickly spread among the neighboring countries, and soon around the world, reaching the level of a pandemic in early March. As deaths rise and lockdowns increase around the world, Chinese propaganda makes it hard to recall that China was the first worst-infected country. But how did they get this far?

How it all started

Although the infection likely started in mid-November, the Chinese government recognized the emergency by January. Soon it became clear that this was not the seasonal flu, but rather something more serious. As deaths rose, Beijing quickly ordered a lockdown of the city of Wuhan – its first and largest hotspot – as well as nation-wide emergency measures right at the verge of the Chinese New Year. These actions, however, came with a cost: a hit to the productive sector of the world’s largest manufacturer.

As infections grew, so did criticism. China’s handling of the outbreak came under fire after reports claimed that some doctors had been censored after warning about the disease at its early stages. This backlash only worsened with Chinese President Xi Jinping’s total absence, and the tragic death of a doctor who previously warned about the outbreak. Amid growing unrest and emboldened critics, the outlook for the Chinese leadership was far from positive.

Following Frank Underwood’s playbook, the Chinese leadership soon stepped up with their efforts to fight the COVID-19 outbreak. Most notably, President Xi Jinping abandoned isolation, and Chinese state media started with strong rhetoric to silence its critics. What followed was a series of drastic measures that helped in the fight against the spread of the virus. From mega-hospitals built in ten days to AI-powered mobile data tracking, China flexed its muscles to send a powerful message: This is war and we are gonna win it.

This change of narrative was not unjustified. The implication that China did not report the outbreak on time was a hard hit in itself. Besides, economic prospects were starting to look grim. This is why China stepped up its narrative and presented the epidemic as an ongoing war, fought not by soldiers, but by medical heroes in the frontline.

Soon, efforts proved effective. Infections started to drop, and ad-hoc hospitals started to close. This ‘victory’ helped China present herself as the real hero of this battle, putting its draconian measures as an example for the world. However, for many other countries, this was just the beginning. As infections in Europe grew and hospitals became saturated, many Western democracies implemented some of Beijing’s extreme measures. Unfortunately, infections didn’t seem to stop. The world was now coronavirus territory.

As Europe scrambled to find a coordinated response, China was eager to help. Soon this help arrived, and as Brussels struggled to make a move, Beijing kept showing off. Media outlets swarmed with reports of medical supplies, tests, and Chinese experts arriving in Europe. Propaganda stressed her solidarity with some of the worst-hit countries. Commentators and philosophers started to point out the advantages of the Chinese system and even compared its apparent competence with Europe’s very evident flaws. Trump’s European travel ban and the corona-bond controversy fired up this sentiment further. Beijing was the new queen of the prom.

The honeymoon didn’t seem to last. Reports on defective testing kits and their devastating effects on many European countries soon fueled more criticism towards Beijing. This only worsened once the US became the new coronavirus hotspot. Trump made it sure to point out fingers and soon Beijing was at the center of the fire. Other countries like Germany stepped up their propaganda game to defend leadership status in Europe. 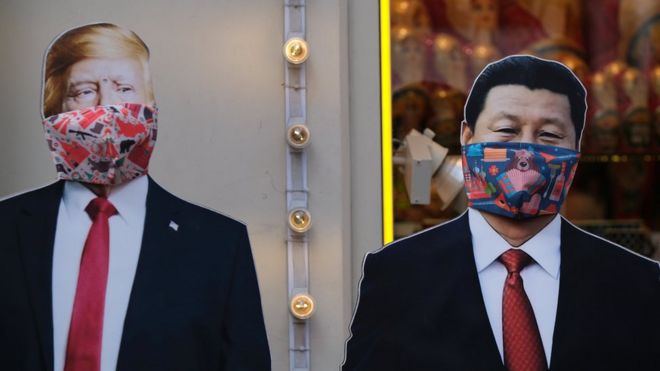 What’s next for China?

The coronavirus propaganda game is far from over. Just recently, the US intelligence community revealed that China might have concealed information on its domestic outbreak. President Donald Trump has increased his harsh rhetoric against Beijing, accusing her of influencing the WHO to improve her reputation. Western media has joined, blaming the extent of the pandemic to China’s lack of transparency. This escalation even risks jeopardizing research on COVID-19.

Now the challenge is shifting towards the upcoming economic slowdown. In this uncharted territory, the China question in Europe remains a mystery. With both supporters and detractors in the EU, the role China plays in the global economy will be now central to Europe’s and the world’s foreign policy. With an economic downturn around the corner and a weakened Washington, the world seems to approach a new age of multilateralism.

How to Survive Home Office?

How much can you earn with Amazon Music?

The Most Disappointing Leaders of the Modern World

“I Hate Greta Thunberg” – But Why?

Tension in Hong Kong – 24 Hours in the Storm

Iran crisis: Is World War III Really at our Doors?

Want to start your own website in 15 minutes? Try Dreamhost!

@2020 - PenNews. All Right Reserved. Designed and Developed by PenciDesign
FacebookTwitterInstagramLinkedinYoutube